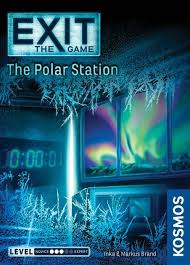 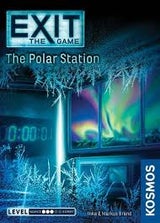 Exit the Game The Polar Station

Exit: The Game – The Polar Station is a co-op game where you and your team have to work against the clock to try and decipher 10 riddles. You’re introduced into the scenario: you and your teammates are scientists at a research station in the frozen tundra (you know things aren’t going to end well when it sounds suspiciously like the intro in The Thing!). And sure enough, the station is evacuated due to a hazard, but you and your fellow researchers remain trapped inside. Your only chance of getting out in time seem to be a book full of gibberish and an odd circular coding disc that seems connected to it, somehow…

Escape Rooms are taking the world by storm right now. They’re a ‘locked room’ scenario where you have to work together as a team to unravel clever, subtle clues that are spread around a room, which move you ever-closer to figuring how to get out – and there’s always a time-limit. Design duo Inka and Markus Brand have teamed up with KOSMOS to create Exit, a series of fiendishly thinky escape rooms… Albeit, in a card game format. You can play this one in your living room (but there is no need to physically shut all the doors)!

Don’t panic, this is a spoiler-free description of the game. We will say, however, that this is a one-time activity, also known as a ‘destructible game’. You might need to cut, fold and draw on some of the components.

The Polar Station works in the same manner as the other games within the Exit series. You and your team have a deck of 26 riddle cards, lettered A-Z. There’s also a booklet with a blurb introducing you to the scenario. An array of pages follow with initially meaningless text and images. You’ll be drip-fed riddle cards, which you pluck from the A-Z deck at the relevant time. You need to solve them together with what information lies within the booklet. No prior general knowledge is required, but you may need to think creatively.

When you think you’ve solved a riddle, align up the suspected code using the circular coding wheel, and it will cleverly reveal whether you’re correct or not. Solved it? You’ll receive more riddle cards. Got it wrong? Try again – was there something you missed? Happily, like real escape rooms, there’s ‘clues’ (a mini-deck for each riddle), which gradually push you in the right direction if you get stuck… However, you record the time it took you – minus how many clues you used – to get your end-game score. Can you and your team exit out of the Polar Station before the hour is up?

The Exit series of games come with a range of difficulty. Take note that The Polar Station is rated at three out of five (one being easy, five being very hard), placing this pleasantly in the middle. But like any riddle, they’re always obvious once you know the answer… The tricky part is the journey you take to reach the answer in the first place!