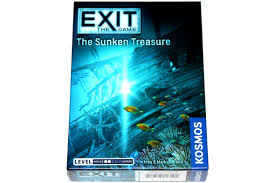 Exit: The Game – The Sunken Treasure

Kosmos series of Exit games offer a ‘escape room’ experience in a box. Of course there isn’t the same physical experience of an actual escape room, but through clever use of cards and puzzles they manage to capture some of that special magic.

Any game that makes you feel clever is always a winner, and Exit does just this. But don’t be thinking it’s an easy feeling. The puzzles, while logical, do take some thinking about and there are some absolute stand out moments in a number of the boxes.

Exit’s system utilises a few decks of cards, and a clever dial that serves to direct you forwards. Puzzles will reveal a code which when spun into the dial reveals a number. You search the solution deck for this number and this card tells you whether you were correct or not. How it works is a mystery!

There are clue cards at three levels if you find yourself stuck and it all works together really well. Each game is themed around some sort of mystery that usually involves an escape of some sort. They can be done solo but are better experienced as a group of up to four people.

We don’t want to spoil to much but it should be noted that in the process of playing Exit: The Game you will be permanently altering the components so this is not a game you can play more than once.

In The Sunken Treasure you set of in search of the treasure of the Santa Maria. Finding a shipwreck leads to you being trapped underwater with an assortment of riddles. Can you solve them? Where will they lead?

Tune into ELF FM this Christmas with your favourite team

Wake up to Breakfast with Roody Doody

Get to the Heart of todays News With Ivy McVine

Book a Game
Buy a Voucher